Electromagnetic frequency spectrum as occupied by emisions from modern technology.

The inhabitants of most populated areas now dwell within a virtual ocean of technological energy waves. The fact that such influences operate beyond the scope of our sensory perception does not mean they are without tangible effect. Public concern is on the rise as physical and mental abnormalities attributed to EMR by mainstream science become increasingly apparent. The extent to which one is vulnerable on a daily basis can be managed by employing commercially made meters designed to detect and quanitify this radiation. Similarly, they can be employed to objectify the effectiveness of mitigation strategies such as are described on our Reducing EMR page..

Most such instruments are designed for measurement of either low or radio frequencies. A few incorporate both functions, often at the expense of input resolution. Examples for each of these three types are provided below. Unless a meter is specified as "tri-axial" or omni-directional, its strongest sensitivity will be aligned with a single axis. This can be demonstrated by rotating the meter 90 degrees on both its horizontal and vertical axis. Although some users prefer an averaged reading, the latter technique can assist in determining the topology of the emitted radiation. At the relatively low price point indicated below, they are marketed for informal applications. The type of "EMR survey" acceptable for medical or legal purposes presupposes a trained techncian with lab certified equipment.

As illustrated above, the emerging 5G network will utilise frequencies from 700MHz up to eventually 90GHz in the milimetre wave region. There are no consumer or semi-pro meters yet available that will measure the higher portions of this spectrum. 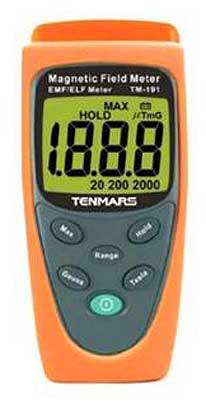 Meters that detect the magnetic field intensity of low frequency radiation from powerlines, mains wiring and connected appliances are termed "gaussmeters". Some will also display a reading in untis called "Teslas".The example above covers a range of 30-300Hz and is available for under $100 from outlets such as eBay and Amazon. To measure inverters and switching circuits, a model with a higher range into the tens of KHz is required. http://www.tenmars.com/

Depending upon a particular RF meter's design, up to three modes of measurement may be selected. Each has its own advantages. Microwatts per metre (power density) is indicative of absorption. Volts per meter (signal intensity) indicates the intensity of signal one is exposed to. Decibel metres (radiated power) is an algorithmic scale of intensity relative to 1mW. These multiple units of measurement, as well as the sub-denominations of each, sometimes introduce an element of confusion for newcomers. Fortunately, numerous calculators, and conversion tables such as those below, are available online. http://www.compeng.com.au/field-strength-calculator/, .http://www.emfwise.com/formulas.php, http://www.hypercable.fr/images/stories/Conversion_Chart_dbm_v_m.pdf, 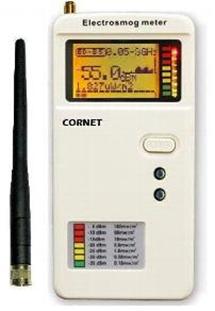 This sub-$250 Taiwnese meter covers the 1MHz to 8GHz range currently uilised by most mobile, radio and Wi-Fi technologies. It is popular for its detailed LCD display, and cost-effective accuracy augmented by a demountable antenna. In common with certain other meters, such as the Acoustimeter AM-10, it also offers an audible output of the detected signal structure which often assists with identification. Cornet also offer a smilar unit capable of reading both mains-type and RF. All are available at the online sources mentioned above. http://www.cornetmicro.com/ 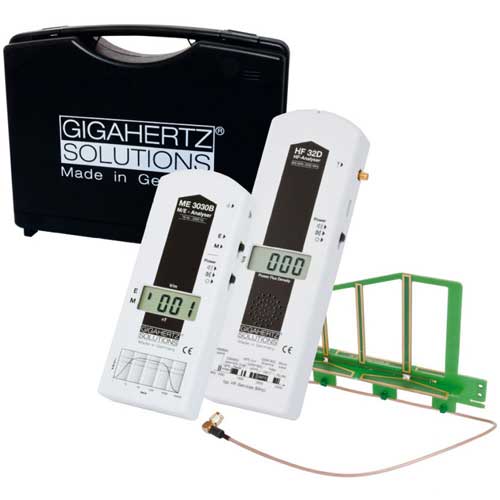 The German-made, semi-pro gaussmeter and RF meter pictured above are available separately, or as a cost-effective kit with foam-lined carry case starting at around $500. The RF meter features an externally mounted log periodic antenna that enables direction finding of encountered signal sources..http://www.gigahertz-solutions.com/en/ 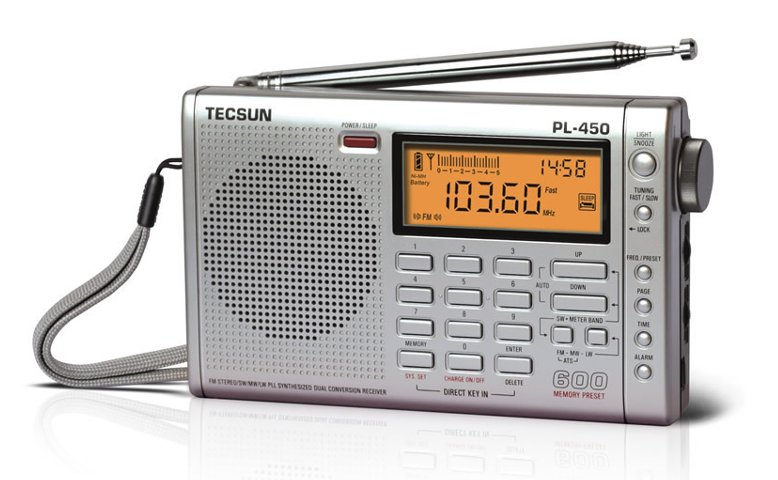 If no dedicated meter is available, an ordinary FM radio can provide some indication of the presence of RF emissions. Hold the radio near a suspected source and adjust the tuning dial until static interference or "splatter" is heard. Move away and notices how the sound diminishes. 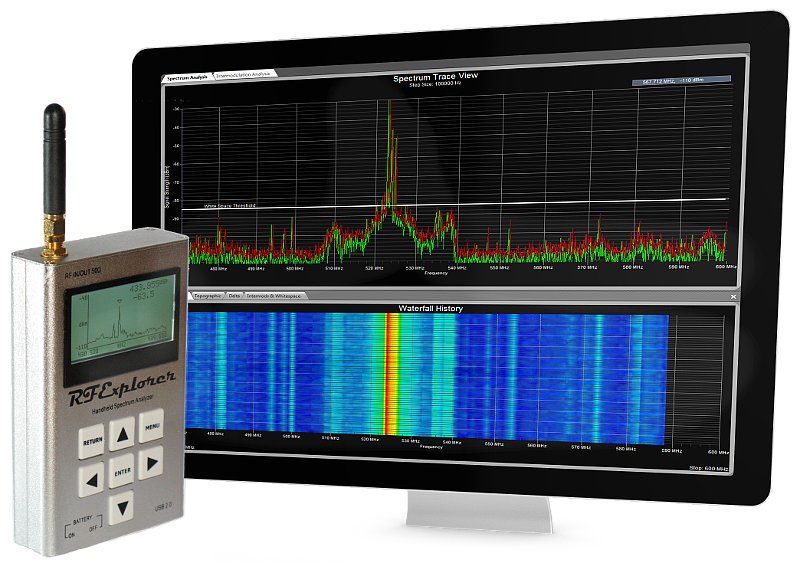 The meters described above provide a single number readout representing the sum signal strength of all frequencies within their range of sensitivity. In contrast, a spectrum analyser presents a visual graph of the activity of individual frequencies across a broad spectrum. This allows specific sources to be identified and monitored. Beginning at under $400, the most affordable entry to this capability is the hand-held RF Explorer. It is packaged with proprietary Touchstone software for alternative viewing on a computer screen. http://rfexplorer.com/..A step up in price range is the Aaronia Spectran series. http://www.aaronia-shop.com/products/spectrum-analyzer/handheld/ 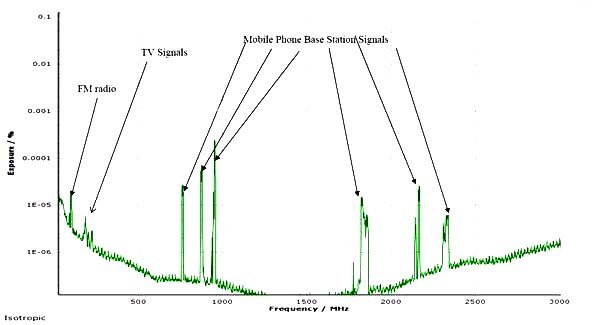 By holding an RF meter with its display toward you against a baking tray, or similar flat metal sheet, incident signals will be blocked in the direction you are facing. With arms outstretched, slowly rotate your body, meter and tray in unison, full circle while noting the direction of highest reading. When this occurs, the dominant incoming signal is at your back. If no substantially higher reading occurs at any single point of rotation, multiple signals are probably arriving from different directions. This mandates a more precise solution requiring a true directional meter. Otherwise, you may inadvertently concentrate microwaves instead of reflecting them away.

The following programs can be run on most any computer with a Wi-Fi modem. They utilise the latter's input stage as a detector, and are thus limited in readout to that particuar bandwidth, being in the vicinity of 2.4GHz. Their intended function is to locate Wi-Fi networks operating nearby, as well as assist technicians to optimise moden installations and detect possible interference from other services. However, this software can also indicate to health-conscious persons the extent of Wi-Fi activity in their immediate environment. Below are several examples. 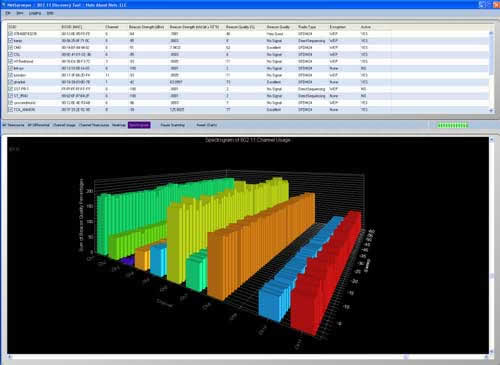 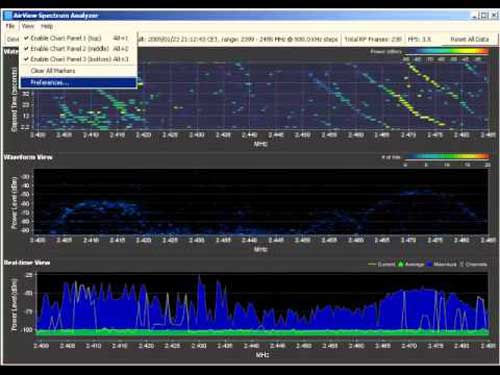 The above product is amoung the cheapest methods to view the entire Wi-Fi spectrum instead of simply the 14 preset channels utilised by modems. The package includes a USB dongle and sells for under $100. 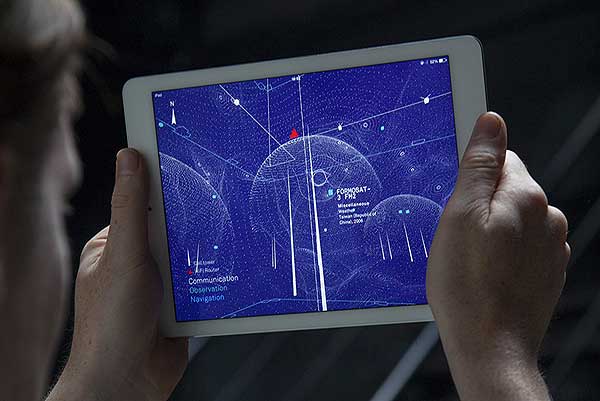 Install this app on your Android or IOS device and walk around to see EM fields superimposed upon Significantly, this program is not limited to depicting Wi-Fi since it also draws upon a worldwide database of existing cell towers and satellite services. 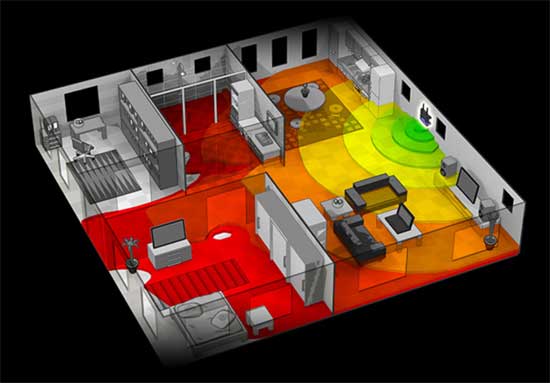 This is the "free" version of the Ekahau Site Surveyor. Its scope of operation differs from the foregoing applications. You load a map of a floorplan or neighbourhood into the program. This then appears on your computer screen. As you walk around, you stop at any desired location, place the trackpad pointer on the corresponding position on the map, and click. This records a measurement of Wi-Fi signal levels at that spot. After you repeat this numerous times over a given area, the software then generates a colour-coded map (green is strongest) indicating the field gradients within it, as well as the identity of each contributing modem.

There is another category of software marketed as Android apps for mobile phones and tablets. These utilise the device's receiving antenna and hence are limited in measurement to its operational bandwidth. Available monitoring functions include ambient phone signal levels and cummulative personal exposure. 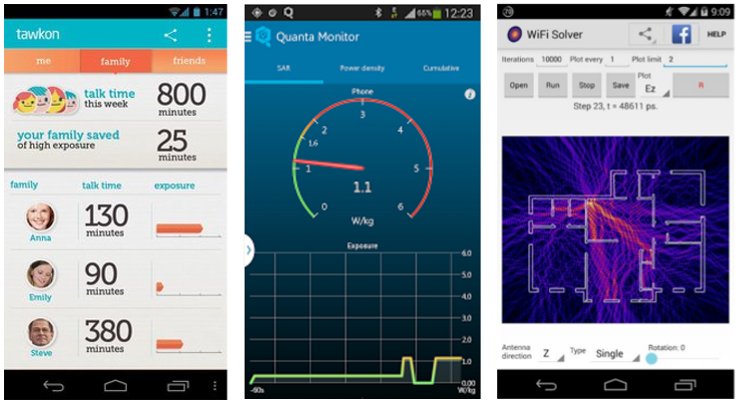 Left-to-right: Tawkon, Quanta Monitor and Wi-Fi Solver which is a simulator, not monitor. All these and more are downloadable from at Google Playstore.

Please note that the inclusion of commercial products on this page is indicative only and does not constitute an endorsement for finanical interest on the part of EMR Aware.