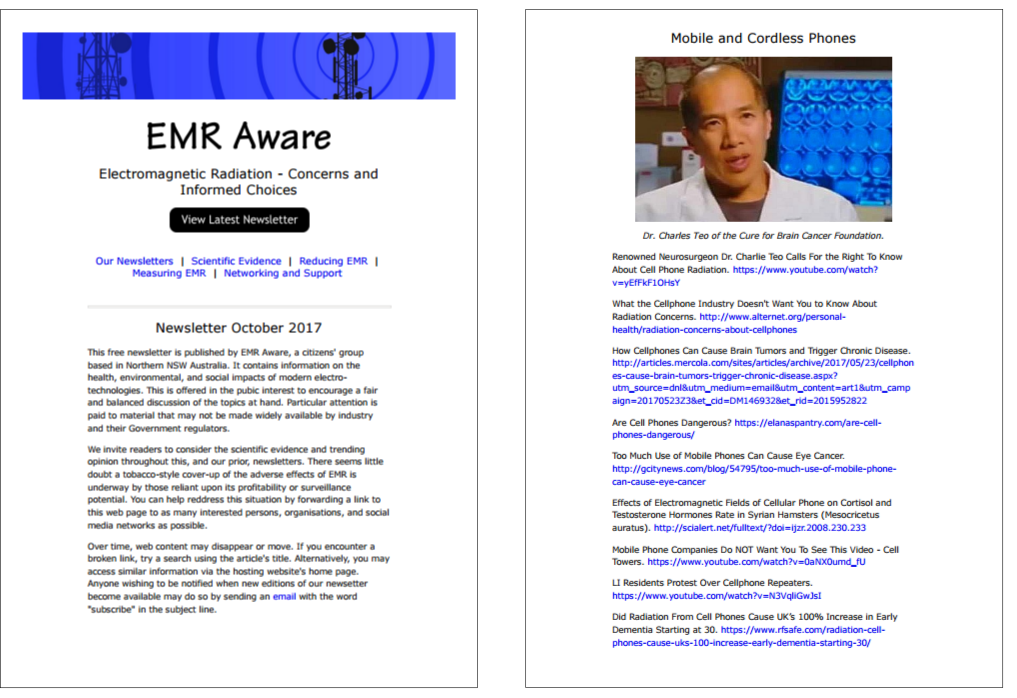 Sample of first two pages of one of our newsletters.

EMR Aware is an Australian citizens' group advocating for greater public awareness of the adverse effects associated with exposure to man-made electromagnetic radiation. Implicit in this undertaking is the demand that industry and Government adopt a more precautionary approach to their continuing proliferation. As an access point for informed opinion, mitigation strategy and Scientific Evidence, we indirectly support individuals and communities acting in oppostion to potentially unsafe technologies.

This website functions as a portal for our free online newsletter, as well as supplementary reference material. Publication began in July 2014 in response to a strongly contested proposal for city-wide Wi-Fi in our local area. Over the years, the content has broadened to encompass the full spectrum of health, social and environmental impacts associated with electro-pollution. Our readership now numbers in the tens of thousands worldwide.

The aforementioned information is conveyed largely as external web links to the latest scientific and media articles, highlighted by images and commentary. For the reader's convenience, this material is arranged topically within each newsletter issue as follows.

The evidence and trending opinion thus offered is intended to promote a fair and balanced discussion in the public interest, and dispel the disunity caused by ignorance of the full facts. Particular attention is paid to material that may not be widely disseminated by vested interests. In fact, there seems little doubt a tobacco-style cover-up of the risks inherent to EMR, and wireless technology in particular, is underway by powerful entities reliant upon its profitability or surveillance potential.

Taken as a whole, our newsletters represent a comprehensive treatment of the increasingly diverse and challenging field of EMR. It is worth pointing out, however, that content linked to therein may disappear or move with the passage of time. If you encounter a broken link, or outdated information, cut-and-paste the actual title of the desired article into your browser's search bar. Failing that, similarly relevant material will almost certainly be available via the originating website's home page. This is one reason why we normally include the full URL for each clickable entry.

At the time each newsletter is published, a short notice is privately emailed (Bcc'd) to everyone on our subscription list. It contains a link that will open the latest edition in the form of a web page. This can be read online, printed out or saved as a PDF. Readers wishing to subscribe to the above notices may do so by sending a request to contact@emraware.com. Our email list is dedicated exclusively to the newsletter and occasional updates. It is our policy to keep your details confidential and not share or use them for any other purpose.

Due to the worldwide escalation in concern regarding EMR, a wealth of further information and subscription-based publications can be accessed on the websites of the over one hundred organisations linked from our Networking and Support page.

EMR Aware does not sell products, or solicit or accept donations. Readers wishing to help redress the current injustices surrounding EMR can do so by forwarding a link to this website to as many interested persons, organisations, and social media networks as possible. We also have available by request a variety of educational literature, posters and DVD's for free distrubution at non-commercial events or within your community.

We are often asked for an opinion on what constitutes a "safe" level of EMR exposure. There is no single answer since both individual sensitivity and one's prefered reliance upon electro-technology define what might be considered an acceptable risk.

With regard to the mobile phone and wireless spectrum, the Institute for Building Biology and Ecology recommends a safe threshold of no more than 10 micro watts per square meter (10 uW/m2) for living spaces and less than 5 uW/m2 in sleeping areas. Kalle Hellburg and The Bioinitiative Report propose similar levels of 3uW/m2 and 10uW/m2 respectively. 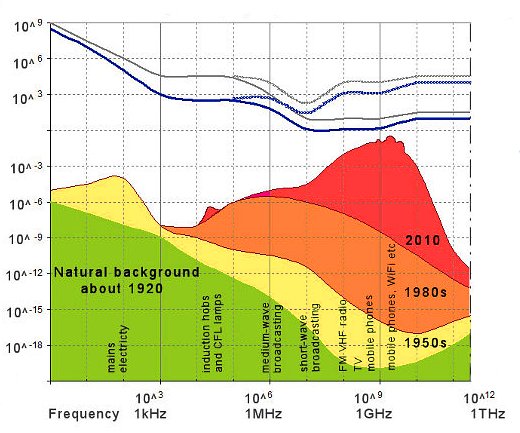 However, even if all personal devices are factored out, such relatively low power densities may be difficult to achieve in the absence of dedicated shielding. This is due to the ever-increasing presence of man-made EMR within the commuity at large. As illustrated by the exponential graph above, the latter may be billions of times greater than the Earth's naturally-occurring energy field within which all life evolved. Additional to this, the planetary spectrum is biologically supportive as a result of our evolved adaptation to it. By contrast, the selection of technological frequencies is based upon expediency with a deliberately minimalised regard for ensuing biological impacts. 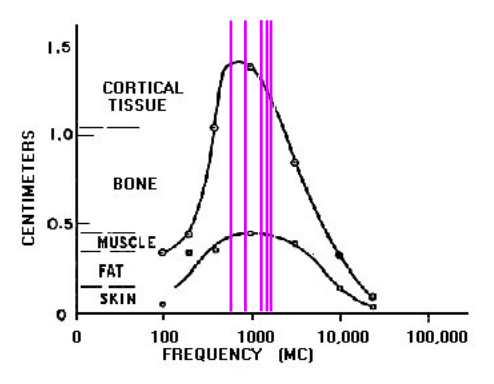 The situation described above is well illustrated by the fact that the microwave frequencies (being 700MHz to 2,4GHz) utilised as transmission carriers by phone and wireless networks correspond exactly to those most readily absorbed by living body tissue. 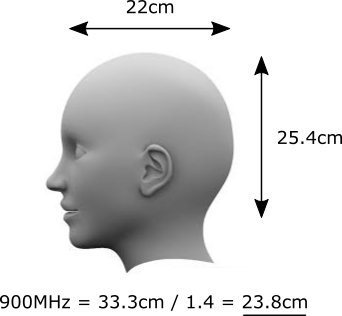 This correlation is compounded by non-linear, stochastic and resonance effects. As an example of the latter, the wavelengths of the aforementioned frequencies, when corrected for the 1.4 refractive index of brain tissue, closely match the physical dimensions of the adult human skull. Furthermore, telephony signals typically incorporate pulse repetiton rates that coincide with the ELF region of human brain wave activity. Others, such as 217Hz, have been shown to inhibit neuronal firing. In short, one would be hard-pressed to design a more efficient or targeted system for deviating the normal functioning of the mind. 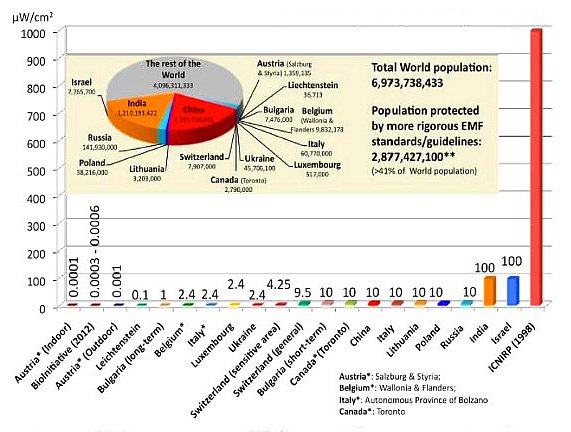 Official regulations designed to protect the public from exposure to harmful levels of EMR vary according to country. With regard to the radiofrequency spectrum, at 1.8GHz the USA, Australia and most of Europe apply the least rigorous standard of around 10,000mW/m2 (1,000 uW/cm2). This is as recommended by the industry-dominated International Commission on Non-ionising Radiation Protection (ICNIRP) and World Health Organisation. The remaining 42% of the world's population enjoys far better protection, presumably because their authorities are more accepting of health-related liability and the steadily increasing backlog of adverse scientific findings.. 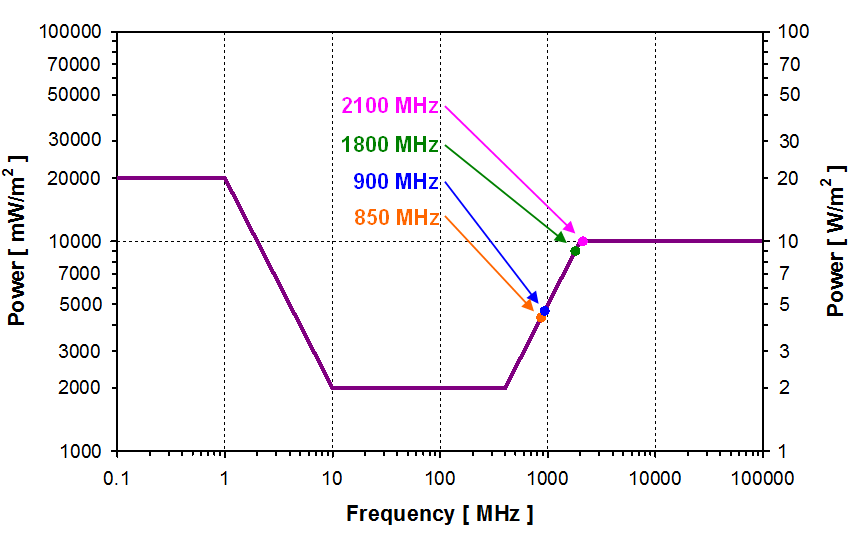 The ICNIRP standard for mobile phone and Wi-Fi emissions is shown above. It is predicated upon denial of non-thermal biological effects, as well as an overly simplistic, averaged power density criteria. Additionally, there is no in-built recognition of contributing factors such as individual age, multiple signal sources or the complexity of the transmitted signal. This increasingly discredited and outdated regime is the reason leading scientists and medical authorities worldwide are now calling for a more comprehensive and precautionary approach. Until this is achieved, the motivated reader may consider adopting one or more of the simple exposure minimisation techniques described on our Reducing EMR page.